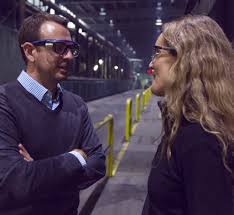 Forging Their Own Adventure

“After moving from the southernmost part of Europe, Cristina Ferreira and Pedro Leitão found a new adventure in a small town; one that has enriched them professionally and given a “cooler” quality of life.

In 2013, with her 40th birthday looming, Cristina could hear a little voice in her head.

It was saying we needed to make a life change – and I felt like it was now or never,” she says.“It was time for us to start a new adventure. And Pedro agreed.”

For Cristina and her husband Pedro, both engineers in the steel industry, that adventure brought them from the big city of Lisbon to the Danish hamlet of Aars (population: 8,105), where they both work today at the Dania Iron Foundry. As much a professional adventure as a personal one, they say the move has helped them both become more specialised in their careers and improved their overall quality-of-life.

“I took the job because it is my area of expertise and I have always wanted to work with more specialised production,” says Cristina,“Denmark has a lot of specialised industry like this and I think that is a very good environment for my professional and personal improvement.”

She says she has been particularly impressed by the level of training and expertise of the foundry’s workers, especially those on the production floor, from whom she has learned tremendously.

“I visited the local technical school not too long ago and I was blown away, they are at such a high level, too, and I think the Danish educational system really takes care of that. It is just a culture that exists all the way through,” Cristina says.

For Pedro, moving from a city with well over a million inhabitants has also meant much shorter commuting times – He and Cristina live a short bike ride from their office – which means more time for taking photos and spending time with new friends.

“The biggest surprise for me has been that Danes were so open,” he says. “Everybody told me beforehand that Danes were so cold. I have not experienced that. I remember that after my second week I already had an invitation to dinner. So I say to my friends now that they are not cold… they are cool.”