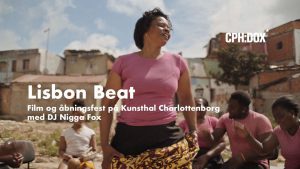 “Get ready to be blown away, when we open the doors to polyrhythms and experimental beats, at our opening party. Starting out with a vibrating film introducing the audience to the Afro-Portuguese music scene, followed by a DJ-set by DJ Nigga Fox we will kick off this year’s festival at Charlottenborg. To get the dancefloor going one of the most prominent figures within the characteristic Afro-Portuguese sound, DJ Nigga Fox, will be behind the turntable – bring the danceshoes and be ready to move those feet. .

ABOUT THE FILM
Come along on a vibrating and rhythmic journey through the suburbs of Lisbon, where colonialism has left its mark. People, young and old, from various backgrounds, struggling with visas and residence permits, get together in the innovative Afro-Portuguese music scene. Music is rising from the streets – the older generations turn to traditional african instruments, while the young producers and DJ’s create their distinctive hyperkinetic and danceable sound – bringing them from street parties in the suburbs to clubs around the world. ‘Lisbon Beat’ is an energetic portrayal of a city, with its cultural and political problems, shedding light on how important music can be for identity and community.”