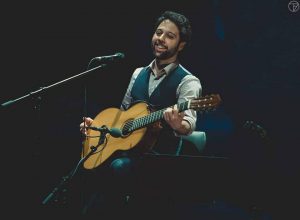 Marco Oliveira is a singer-songwriter and a musician that moves through fado and many traditional genres.
He started studying classical guitar at the age of 13 in the Portuguese National Conservatory in Lisbon.
Since then, Oliveira has released two solo albums:
Retrato (2008) and Amor é água que corre (2016).
He has also collaborated on many renowned music projects, including a duet with singer-songwriter Vinicio Capossela at Teatro Tivoli, Lisbon.