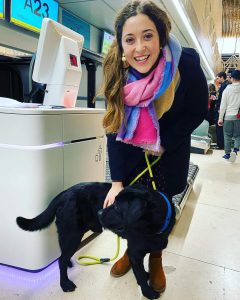 END_OF_DOCUMENT_TOKEN_TO_BE_REPLACED

“Solidarity party for the people affected by the cyclone in Mozambique.

There will be activities for the younger audience during the afternoon. Around 18:00 there will be a possibility to buy some food at the event. Afterwards there will be speeches and livecalls with people from Mozambique – and by the end of this, the event will turn into a party with music and performances.

Background:
The cyclone Idai hit the shores of Mozambique on the 14th of March and has resulted in enormous consequences for the locals.
Climate changes, which are very explicit in Mozambique at the moment, hit the poorest people and countries more severely, even though they have not really contributed to polluting. Countries in the North are mainly the ones to be blamed for the climate crisis, but countries in the South are more affected as they simply do not have the resources to prepare for these types of disasters.
The money that should have been spent on rebuilding the country after the disaster are non-existing as Mozambique is heavily indebted. A group of corrupt bankers, from Credit Suisse and VTB, and politicians from the ruling party have created false companies that have taken up loans for around 12 billion DKK. Also Danish pension funds and banks have invested in these fake-companies that have left Mozambique with a huge debt and unable to rebuild the country after the cyclone.
The repayment of the debt has been put on the population, taken from taxes and larger development projects, leaving no money for the area hit by flooding and destruction.
Overall there are many links to people in the Global North – both through investments, our carbon footprint – and of course, through our compassion with the people affected by the disaster.
Therefore, we want to gather at this solidarity event, which will create awareness about the case and raise money for the local movements that are working non-stop to save people and rebuild the area.

We support directly through Afrika Kontakt’s partners in Mozambique, the left wing media Alternactiva, peasant movement UNAC, member of La Via Campesina, and the womens’ umbrella organisation Fórum Mulher, member of World March of Women. All the donated funds goes directly to these partners at the ground in Mozambique. Support at Mobilepay: 42435 or bank transfer: 8401 1183500 – write “Mozambique” on the transaction. 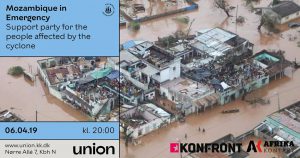