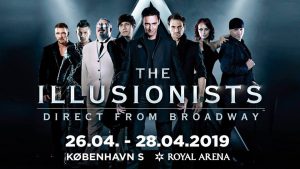 “It’s THE ILLUSIONISTS European Tour 2019, after record breaking simultaneous runs in New York, London and Asia. With the conclusion of the 2017 – 2018 season The Illusionists holds the record as the highest grossing show in a single week at the Marquis and Neil Simon Theatres (Broadway), the Shaftesbury Theatre (West End), the Sydney Opera House (Sydney, AUS), the Arts Centre Melbourne (Melbourne, AUS), and the Auditorio Nacional (Mexico City, MEX).
Collectively these performers have been seen by millions of people around the world and this production showcases their incredible talents together on stage. Audiences witness stunning acts of grand illusion, levitation, mindreading, and disappearance. The Illusionists: Direct from Broadway dazzle audiences of all ages with a powerful mix of the most outrageous and astonishing acts ever to be seen on stage.”